iDSI’s impact in Indonesia was commended during the Fifth Global Symposium on Health Systems Research (HSR) which took place in Liverpool last week.

As part of a satellite session iDSI hosted with CHAI and Sida, ‘Health financing towards UHC’, Pak Budi Hidayat, Professor of Health Economics and Health Insurance at the University of Indonesia and a member of the national Health Technology Assessment (HTA) Committee, announced the decision by Indonesian authorities to delist certain medicines deemed to be cost-ineffective from the national formulary.

iDSI core partner HITAP was instrumental in the economic evaluation of the two medicines which led to the policy decision. The costs of these drugs are strikingly high with only marginal benefits for patients, so much so that they are considered poor value for money and not advised as first-line treatment options even in high-income countries.

With Indonesia the fourth most populated country in the world, running a large-scale health insurance scheme is complicated and there is mounting financial pressure on BPJS. Pak Budi said: “With 200 million citizens in the scheme, BPJS needs to be a more strategic purchaser. There is a real need to be an active purchaser, rather than a passive purchaser; and determine whether to pay for the things we have to pay, or what providers are asking to be paid.” 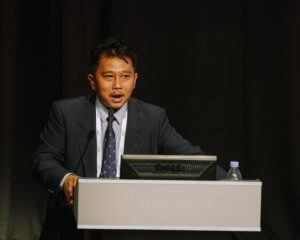 Technical assistance from HITAP to the Indonesian health ministry (including the HTA Committee), the national health insurer and universities began in 2013. In 2017, HITAP provided intense capacity-building support to local research teams on four HTA studies, all of which were commissioned and funded by BPJS, on some of the highest cost items reimbursed by the JKN.

Two of the studies, by the University of Indonesia and the University of Gadjah Mada, respectively focused on the value of cetuximab and bevacizumab as first-line treatment options for metastatic colorectal cancer. The announcement to delist the two medicines marks significant policy impact of iDSI’s engagement in Indonesia; and more importantly tangible institutional progress in the use of health economic evidence to inform policy.

Cetuximab was included in the Indonesian national formulary in 2014. iDSI analysis revealed that treatment for 32 patients in Indonesia came at a cost of IDR 6.5 billion (USD $500,000). Bevacizumab was also shown to be high-priced, with costs of IDR 4.8 million (USD $400) per vial.

HITAP’s work with the Indonesian health ministry considered not only cost effectiveness analyses, but also the barriers to uptake. Only six hospitals, all located on Indonesia’ main island Java, have the capacity to diagnose and treat metastatic colorectal cancer. Although Java is home to 257.6 million people, the other half of the population inhabit other islands, up to many hundreds of miles away. Targeted treatment for metastatic colon cancer prolongs life by one year on average. With substantial distance between some the Indonesian islands and Java, the team also considered the strain on cancer patients who may struggle to access treatment centres without difficulty. As a result, the importance of using other less expensive strategies with lower side effects, such as palliative care, as comparators were emphasised in the HTA study. HITAP accentuated this would add a holistic viewpoint and a chance for policy-makers to deliberate all policy angles.

With cancer drugs accounting for the lion’s share of global drug spending, it’s crucial HTA studies are carried out to ensure costs translate into outcomes which make a difference to patients and thereby ensure long-term financial sustainability of national UHC schemes like JKN. Furthermore, HTA processes need to be institutionally embedded into drug reimbursement policies. iDSI’s engagement with Indonesia, via HITAP, continues and policy briefs describing the study findings are due to be published on the iDSI Gateway by the end of 2018.