UHC Day 2017: The need for a sensible, fair and evidence based Health Benefits Package

The push for Universal Health Coverage (UHC) must focus on designing a Health Benefits Package that is sensible, fair and evidence based – this was the take-home message from IDSI’s visit to Washington DC this week.

The US capital was the setting for three days of meetings and events to mark UHC Day and the release of ‘What’s In, What’s Out: Designing Benefits for Universal Health Coverage’.

During the meeting iDSI, CHAI, JLN, NIPH and Tufts Medical Centre showcased their initiatives and the concentration of their work including their successes, focus countries and potential future opportunities. 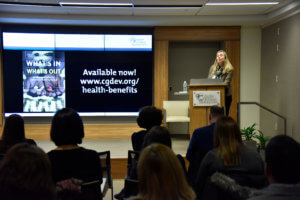 Attendees then heard from Global Development Funders’ representatives: David Wilson from the Gates Foundation, Julia Watson from DFID, James Snowden from GiveWell, Adrien de Chaisemartin from Gavi, Naina Ahluwalia and Somil Nagpal from World Bank and Yosuke Kobayashi from JICA; with all agreeing each partner group is carrying out valuable efforts in the bid to expand and improve healthcare globally.

Copies of ‘What’s In, What’s Out’ were available for attendees to take away and Amanda Glassman explained how the creation of an explicit health benefits plan is an essential element in creating a sustainable system of UHC. With limited healthcare budgets comes tough decisions for policymakers, along with the many facets of governance, institutions, methods, political economy and ethics that are needed to decide what’s in and what’s out in a way that is fair, evidence-based, and sustainable over time. 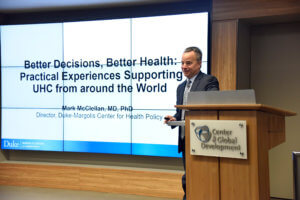 At the heart of Dr Mark McClellan’s keynote address was opportunities for greater value for healthcare spending – specifically, the ‘accountable care’ model, which sees providers held jointly accountable for the cost and quality of care for a defined population of patients.

Dr McClellan, a doctor and economist, said: “There is more healthcare can do than ever before, however this means rising costs in healthcare. The value of healthcare can be improved by developing and implementing evidence-based policy solutions.”

The importance of sharing data and creating interoperability to understand health outcomes within an accountable care system was also put forward by Dr McClellan, who provided Nepal as an example of success in utilising remote personal health tools, telemedicine and lower-cost sites of care: “In Nepal a simple process of patients’ texting in information can result in a visit to their homes by community care workers and a potential prescription of antibiotics. Investment in these modest but effective interventions can also gather useful metrics in the form of electronic health records. We need to move from ‘siloed’ data to data that provides intelligence about our populations.” 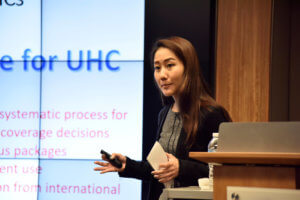 Professor Karen Hofman detailed the strides South Africa has taken towards promoting the health of the population by passing a bill to implement a tax on sugar-sweetened beverages. Professor Hofman, who proudly sported an ‘I am #sweetenough’ t-shirt supporting the sugar tax, focused on fiscal levers in South Africa and the positive impact they have had in the past: “After the increase in the excise tax on cigarettes, sales reduced between 1993-2009 by one third and per capita consumption decreased by 50%. With 25% of teenage girls in rural areas overweight in South Africa, the time is now for translating evidence on sugar to policy. There will inevitably be push-back from various sources but the passing of the bill, which will be implemented in April 2018, is a powerful step forward.” 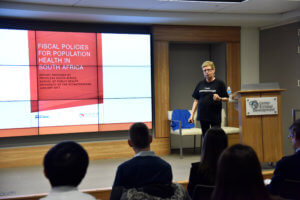 Professor Tony Culyer rounded up the event and took to the stage to emphasise iDSI’s objectives to help low- and middle-income countries to transition from aid, develop skills to spend smarter and to increase access to quality healthcare so they can achieve UHC: “Our aim is to give LMICs capacity to produce policies that will have an impact of health. We wish to leave behind an endowment of expertise for LMICs to build better worlds for themselves.”

A recording of the ‘Better Decisions, Better Health: Practical Experiences Supporting UHC from around the World’ event is available on the CGD website (1 hour 32 minutes).

UHC Day, commemorated each 12 December, is the anniversary of the first unanimous United Nations resolution calling for countries to provide affordable, quality healthcare to every person, everywhere. The United Nations Sustainable Development Goals, that all UN Member States have agreed to, try to achieve UHC by 2030. This includes financial risk protection, access to quality essential health-care services and access to safe, effective, quality and affordable essential medicines and vaccines for all. 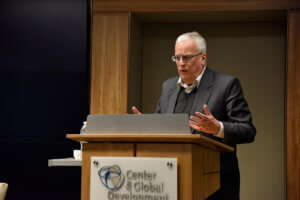