This 25-27 July 2016, a Health Technology Assessment (HTA) Stakeholder Consultative Workshop was held at the India Habitat Center in New Delhi. It was jointly organized by the Department of Health and Research (DHR), the Indian Council on Medical Research (ICMR) and the International Decision Support Initiative (IDSI). This workshop was a positive step in India’s path to Universal Health Coverage (UHC). In the past, India has been quick to answer the call to support the transition towards UHC. In 2005, it sponsored the World Health Assembly Resolution 58.33 calling for countries to incorporate the UHC into their plans. In 2011, it released its 12th Five Year Plan and along with it, its commitment to the UHC and a detailed set of recommendations to the high level expert group (HLEG) for UHC regarding 1) health financing and financial protection; 2) access to medicines, vaccines and technology; 3) human resources for health; 4) health service norms; 5) management and institutional reforms; 6) community participation and citizen engagement; and 7) gender and health.

Despite its commitments, India’s challenge is a growing population of 1.3 billion people and a low public health expenditure of 1.4% of GDP compared to a total health expenditure of 4.7% of GDP [1]. To add to that, health in India, which is a state subject, is wracked with problems in terms of infrastructure and financing. Around 73% of the population are based in rural areas and 27% in urban areas, meanwhile 20% of health care facilities are available in the rural setting and 80% in the urban setting[2]. Approximately 70% is private out-of-pocket costs spent by households and it is estimated that less than 10% of the total health sector financing is through various types of health insurance. India’s health insurance industry is a mix of private and public schemes. Under the public domain, some schemes namely six, are at the national level for certain target populations, and some are at the state level with states initiating their own. Although this is the case, these schemes haven’t been able to reduce out-of-pocket spending[3], which begs the question of how can India improve its healthcare system.

The first day of the event had attracted the attention of the media and close to 100 participants. High-level officials and their declarations during the event further reinforced the political behind the HTA initiative, encouraging the various agencies and health authorities in India to rally behind the banner of HTA. The Ministers of State and the Director General emphasized the importance of expanding healthcare in India and supported the establishment of a HTA system in the country. Key personnel from the Ministry of Public Health of Thailand as well as the National Institute for Health and Care Excellence (NICE) International, UK who are part of the IDSI consortia were also requested by the Indian MoHFW to share their experiences on how the HTA system was first established in their respective countries. These include Dr. Phusit Prakongsai, Director, Bureau of International Health, Ministry of Public Health, Thailand, Professor Anthony Culyer, Emeritus professor, York University & Chair iDSI, Dr. Yot Teerawattananon, Program Leader, HITAP, Professor Bruce Campbell, Former chair NICE Interventional Procedures and Medical Technologies Advisory Committees, Dr. Kalipso Chalkidou, Founding Director, NICE International and iDSI, Dr. Francoise Cluzeau, Associate Director, NICE International, and Ms. Waranya Rattanavipapong, Researcher, HITAP, Thailand.

The second and third days were largely spent on workshop exercises and panel discussions. Only 60 participants, some of whom were also in attendance during the first day of the workshop, were invited to share their viewpoints on how the HTA system should be set-up in India, specifically on the subject of topic selection, a crucial step in HTA research. The participants selected held positions in organizations and agencies that were expected to make up the HTA system in India, these include the DHR, ICMR, the Postgraduate Institute of Medical Education and Research (PGIMER, Chandigarh), Public Health Foundation of India (PHFI), Directorate General Medical Services (DGMS Army), Tata Institute of Social Sciences (TISS), among others. Throughout the event, participants raised questions regarding the barriers to setting up HTA infrastructure in the Indian context. They were especially keen to discuss about how to resolve the various coordination and communication issues between organizations at the state level and at the federal level, given that health in India is considered as the scope of the state. As such participants voiced their concerns regarding the political barriers of having a central authority dictate the evidence provided behind interventions used in all states. The panelists and experts reinforced that whatever system proposed and adopted should be applicable to the Indian context. 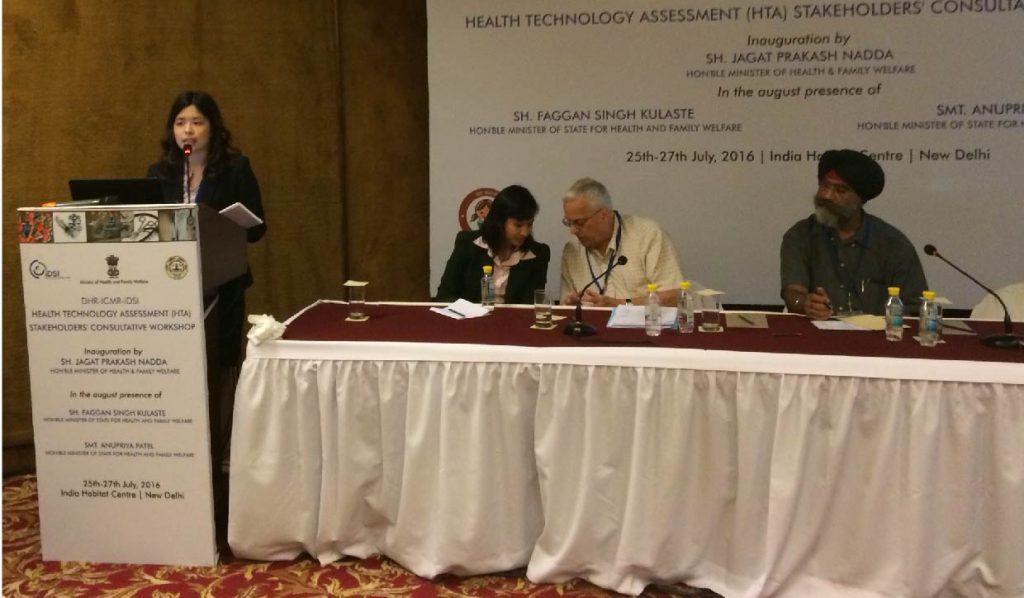 To resolve issues surrounding coordination and communication, one of the participants, Professor Kanchan Mukherjee from the Tata Institute of Social Sciences, proposed a possible HTA set-up. He indicated that because of the very low public health expenditure, trying to introduce a new way of thinking will be difficult and requires taking baby steps in order to create a sense of credibility and acceptance. He added that there is a need to identify an issue that can be taken forward or an issue that can become a quick win for HTA. Given that health selection is a state subject there is a need to get the states on board first. As such a decentralized approach may be undertaken. Professor Mukherjee suggests that the ICMR can think of creating regional hubs in the South, North, East and Western regions of India. These hubs can identify academic institutes in each zone and negotiate with state governments in these zones, work with those that are receptive and later on use the bandwagon effect to get the other states on board. Once ICMR establishes the process, the institutes involved will undoubtedly cooperate.

During the second day of the workshop, a paper-based survey was conducted to assess the demography of the participants as well as their views on the need, demand and supply of HTA in India. The following figures show the results of the survey. 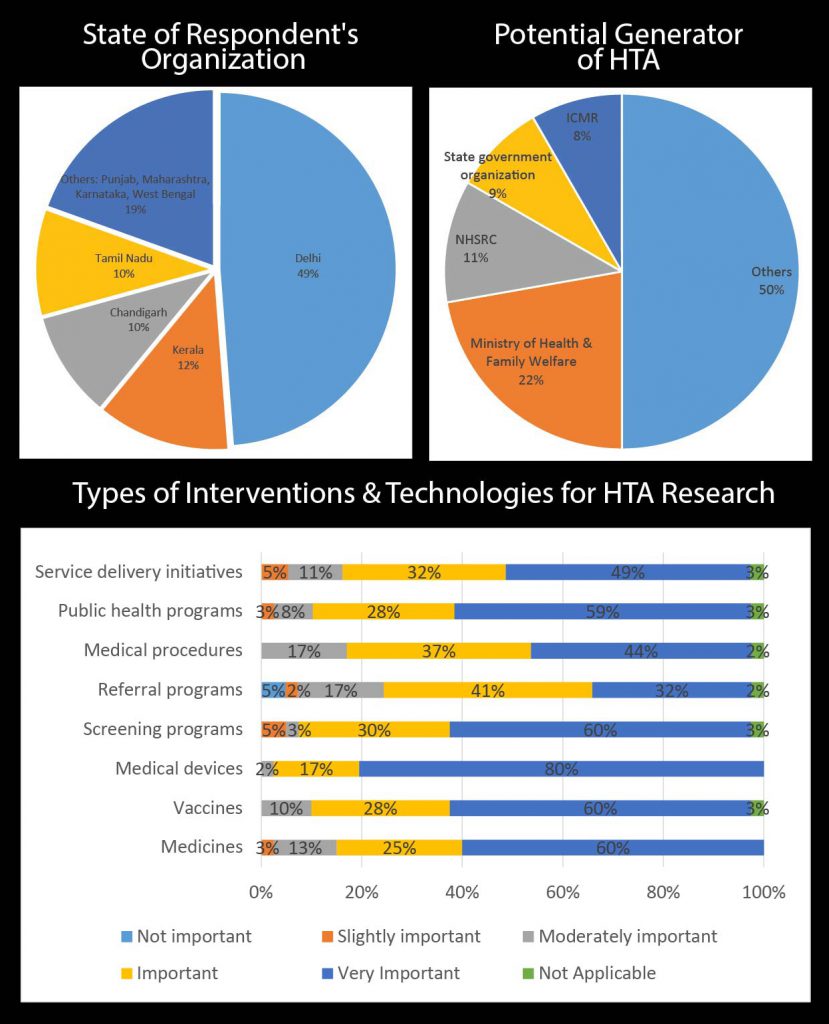 Potential Uses of HTA in India

In addition to these schemes, other areas for use of HTA include immunization which is also a federal issue[2] handled by the National Technical Advisory Group on Immunization. Workshop participants have also indicated that drugs or the National List of Essential Medicines should be a federal subject and other uses for HTA can include benefit package schemes that are provided by the states, in which case it will be the state’s responsibility to conduct the HTA. As suggested by Prof. Mukherjee, a decentralized HTA system would be a good model for India. One thing is certain, despite HTA already having a presence in India, setting up the HTA system is only at its beginning and there is in fact no rest for the weary.